The Scene of the Crime

I told a man yesterday that I consider him my unofficial Pusherman.  Roughly a year ago it was him that said “And Go.”  (Pool swim triathlons have a staggered swim.  Each swimmer begins roughly ten seconds after the last swimmer.  This is an effort to avoid a total pile up as you snake up and back through the lanes.  It doesn’t always work.  More on that later.)

Last spring I pushed off the wall and started the swim leg of my first triathlon. And an addict was born.

This weekend I returned to the scene of the crime, Girls Run the World Sprint Triathlon put on by FS Series. I was excited, eager to see my own improvement over the last year.  It is hard to really compare race times to one another because the conditions are always different.  This race was hilly, that race was congested.  But I had a neat opportunity to compare the progress I have made in the last year by doing the exact same race again almost a year to the date.

If you are simply humoring my obsession or you have already asked me “So, how was the race?” and gotten my long-winded reply you can feel free to skip the rest of this post.  My feelings won’t be hurt at all.  Really.  I filled up my wine glass trophy enough times last night that I barely have any feelings today.

Swim: The swim is my strong sport.  It is the one that seems to come naturally to me and I have the advantage of having been a life-long swimmer. I knew as soon as we lined up that maybe it was going to be a rocky swim.  “I am not a very good swimmer, I haven’t been in the pool since I don’t remember when!” Several women around me echoed similar thoughts.  Umm.  Maybe I should have entered a different swim time?  We are lined up by our 100 yard swim times and I was conservative.  Lesson learned.  By the end of the first 100 yards there were four women ahead of me piled up on one another and it is impossible to pass that many people. I did a little breast stroke so I could see what was going on, passed a few folks when I had the chance and reminded myself of the truth I have heard numerous sprint triathletes utter –   “Tris aren’t won or lost in the swim leg.”  In the greater scheme of things being a fast swimmer gets you an early swim start and you waste less adrenalin waiting in line, but that’s it as far as it goes with respect to any kind of huge advantage.

The lap lane traffic jam was evidenced in my times.  5:47.  Last year was better with 5:24 but there was a fair amount of traffic in that race, too.  I am still too chicken to put in an ambitious pace time (sub 2 min/100 yard) for my swim for fear of getting in the way of the “real triathletes.”  Someday.

Bike:  The bike is my weakest leg. I live in fear of my chain popping off.  In spite of the great strides I have made in bicycle maintenance I am still nervous on a bike. I brake when I go downhill.  That does not a competitive cyclist make. But it’s fucking scary, guys. Gone are the days when I would fly down a hill all “Look, no hands, Mom!” I rode my hybrid at this race last year so I knew I would shave some time off of last year’s pace just by virtue of being on a road bike.  Who cares if it is a 30 year old lever shifted road bike (a sweet sparkly blue Sekai 1000, a Japanese bike circa 1980)?  It’s mine and I didn’t need a second mortgage to buy it! I am still too scared to clip in but I didn’t brake on the down hills! Progress, folks!  And my time reflects that!  Shaved just about five minutes off my bike leg.

This picture says “I just changed my clothes in the parking lot because since I have had two babies I no longer believe in things like privacy” or something very similar.

Run: I came into the transition area to rack my bike a little winded.  I pushed myself on the bike and I was a little nervous about the run.  I forgot my Garmin and I have never run without something telling me my pace.  I was terrified that I would burn out quickly or end up running super slowly in an attempt to make sure I could finish.  I slugged some water and racked my bike and figured “Here I go.  Fuck it, I am just gonna get behind someone that “looks faster” than me and go.”  I exited transition and as I ran past the DJ I heard the best sound I could have imagined – shitty synth drums.  I can’t figure out how to spell it out – but you know the drum lead… “Miss her, kiss her, love her…. That girl is POISON! Never trust a big butt and a smiiiile…” I was smiling alright.  Two more miles and I was done.

This race is a pain in the ass, like most in and around Raleigh.  The first mile has lots of downhills and lulls you into a false sense of security.  Grabbed water at the turn around and wrapped my mind around the fact that I had to run back up all of those hills.  My run was… okay.  I should have pushed harder. Live and learn.  And don’t run behind someone that “looks fast.”  What does that even mean?  And don’t forget your Garmin, asshole.  You are technologically dependent, accept it and move on.  Shaved just about a minute off of my run time.  Not impressive for a year’s worth of training, but I will take it.

Summary: I shaved ten minutes off of my time.  My swim was slower, my bike was a good bit faster and my run was a little faster.  My transition times showed huge improvement because I didn’t stand there doing that thing that I do at the airport where I check my pockets compulsively 800 times.  I just put my shoes on and I left.  I did the whole race in my tri-suit.  Last year the idea of riding my bike and running in what amounts to a bathing suit made me want to die.  This year (after a year in a gym locker room and a year working hard to accept and nourish the body that I have) I decided to just go for it.  And guess what – nobody gave a shit.  Not a single person shouted “Go #48!  Go, right back and put a shirt on over that mess!” Go figure.

I don’t usually talk numbers because I think the message gets lost in the details  but if you really wanted to know you could see them on the internet and the idea of you creeping around the internet freaks me out. If you are dying to see the side by side comparison – here you go –   2013 and 2014.

Am I still riding high?  No such luck.  In case you were wondering I figured out the fastest way to knock a girl down a peg or two.  I was standing around waiting for the awards ceremony (having figured out via the wonders of live tracking and smart phones that I had actually placed in my age group.) I’d eaten a bagel.  I’d changed into dry clothes.  I had called my mother.  I had a little time to kill. I walked up to the DJ booth to thank the DJ I Could Have Given Birth To Without Having Been a Child Bride. “Thanks for Bel Biv Devoe, it was right on time!”

He smiled.  It was a smile similar to the teenage checker at the grocery store.  It was the “I am humoring you because I need this job and you seem nice enough” smile.  And then he did this terribly confusing thing.  He stuck his fist out.  Slowly (thank goodness or I’d have thought he was going to punch me.) I stood there looking perplexed for what seemed like an eternity and then I realized he was, as the kids say, fist bumping with me.  I swallowed a guffaw and stuck my fist out.  And then I turned on my heel (not easy to do in flip-flops) and ran.  Because I was in hysterics.  Whatever level of cool is afforded to those that place in their age group at an all-womens popular with first-timer’s sprint triathlon is instantly stripped when a twenty something tries to fist bump you.

So, how was the race?  It was awesome.  Do I have any advice?  Train hard.  Have fun.  Get there early and you will be the first person to use your chosen porta-potty.  And stay the hell away from the DJ.

Cheers!  What do you have planned for the summer?  Fitness goals or otherwise? 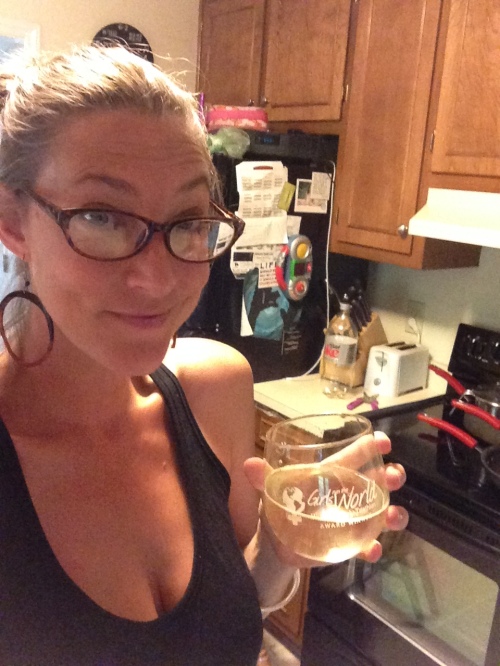 And don’t even talk to me about the Diet Coke in the background. Change is hard. I don’t drink it as often as I used to.  Lame excuse, I know.  Just gaze in to my “I have had three glasses of wine” eyes and tell me how you plan to kick your own ass this summer.  It feels so good.  All the cool kids are doing it.

5 responses to “The Scene of the Crime”