Fear and Swimming in Lake Jordan

As a child I wondered just how fast I could run if I was being chased by a monster. I believed, as many of us do, that if I was truly terrified I could probably run twice as fast as I normally did. I am sure you have heard stories of heroic efforts put forth by a mother, lifting a car to save her child.  I hope I never find out if I am capable of such feats of strength.  But after this morning I can tell you one thing for certain – I don’t swim very fast when I am petrified.  In fact, panic seems to slow me down quite a bit. 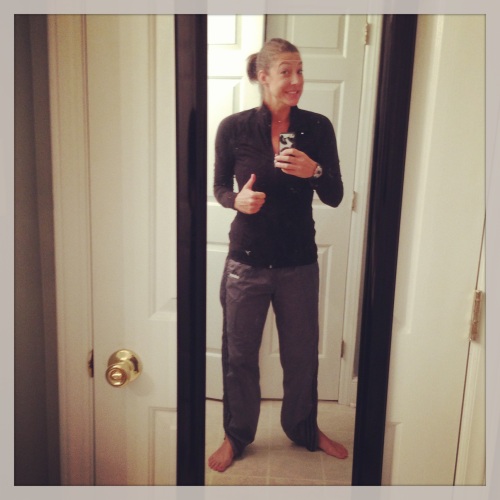 5 am. No coffee yet. Not yet petrified.

I left my house a little before six this morning.  Driving to Jordan Lake to participate in my first open water swim competition I was not particularly worried.  I have been swimming more than usual as I attempt to get over a nasty case of tendonitis.  I am a swimmer.  I’ve always been a swimmer.  I was never particularly fast but I swam on the swim team as a kid.  I was a lifeguard well in to my early 20s.  One mile.  36 laps in a 25 yard pool.  The toughest part for me is keeping track of the number of laps.  I am a swimmer.

We lined up on the concrete slab used for boats at Jordan Lake.   I watched the swimmers heading in for the Big Deuce (the two mile swim.) I watched carefully. As far as I could tell it looked like the concrete went down almost to the end of the dock.  I thought I was going to be okay.

I have two fears.  Maybe more than two, but I have only two deep-down-in-my-bones fears.  Mud and strangers touching me.  I can’t recall the source of either fear.  I was never tackled to the ground by an angry mob on a muddy field.  I just don’t like the feeling of mud between my toes.  When teenagers were swinging on rope swings and jumping in and out of creeks I abstained.  No level of freedom made mud between my toes sound like a good idea.  I stopped going in the creek when I stopped being able to keep my jellies on.  And strangers touching me?  That really doesn’t need an explanation, does it?  I’m not big on hugging a casual friend.  So elbow to elbow in an elevator or a crowded mall?  I don’t like it.  I just don’t enjoy the feeling.

The apparent lack of mud at the race’s start was all that was keeping this experience from being a perfect storm.  There was no avoiding the groping that would take place as more than a hundred swimmers take off at once.  And once we were swimming? There was bound to be a few moments when swimmers collided or a stray arm grazed my leg.

I was ready for that.  The mud and the strangers.

I was totally and completely ill prepared for the panic, however.  We were treading water at the starting line and counting down.  Three.  Two.  One.  Go!  I put my head down and started to swim.  I had avoided the mud and now I just needed to get past the arms and the hands and the strangers.  I had planned to start slow and easy, conserve my breath.  A stroke and a breath.  Two strokes and a breath and … gasp.  My heart was pounding.  Light brown, murky water.  That was all I could see.  I lifted my head out of the water and looked towards the first buoy.  Face back down in the water.  Stroke and a breath.  Stroke and stroke and a breath and …

Fuck.  This.  That’s what I thought as my feet drifted downward and I began to tread water.  Beneath my goggles I felt my eyes fill with tears and I said out loud “I don’t like this.”  And then I smiled.

Hours in to my labor with Lucy I told my  doula “I don’t like this.”  She laughed and said something to the effect of “It’s a little late to stop.”  I wasn’t going to turn around. I was not going to swim back to the dock.  Lifeguards helping me out of the water asking “Are you ok?” How would I respond?  “Oh, I am fine.  I just… umm… hate this.  It’s … scary.”

I had identified the feeling. I was scared.  Terrified, really.  I hadn’t thought much about the fact that I wouldn’t be able to see anything.  It was like swimming with my eyes closed. Even if I swam painfully slowly I would be finished in under 40 minutes.  My slow and easy mile swim in a pool is about 31 minutes.  Forty minutes max.  I was in labor for hours and hours and I did not like that, either.

And so on and on it went.  I would calm down.  I’d sing songs in my head and count strokes and start to think “There’s another mile swim here in September, I know what to expect now and I think I’d be fine and….” gasp.  The heart pounding fear would be back, like on a roller coaster when you think that there can’t possibly be ANOTHER death drop.

Petrified and swimming breast stroke at least a third of the way, I held my own.

My heart has stopped racing.  But I haven’t.  I’m signing up for the one mile in September.  I’d do the two mile, but I haven’t totally lost my mind.

There are not enough ways to scare the shit out of ourselves as adults.  As children we get scared frequently.  Sometimes we cry, sometimes we scream.  But 75% of the time we catch our breath and cry out “Let’s do it again!”

And I need a reason to keep swimming.

In the last month I have iced and stretched and yoga’ed.  I have been swimming a lot.  A nasty case of tendonitis and bursitis in my hips has sidelined my running and cycling.  And so I go to yoga and I swim and I walk and I try not to get angry with myself.  Because anger has very little do with healing. But fear might.  Because I feel better tonight than I have in weeks.