I have a weakness for talking animal movies. Babe. Dr Dolittle. Beverly Hills Chihuahua (that might be the most embarrassing thing I have admitted here.) I suppose I watched either too much or not enough Mr. Ed as a kid.

Emily has inherited this love of mine. Together we were watching Racing Stripes, a plucky little film about a zebra named Stripes that thinks he is a race horse and the young girl that believes in him!

I was doing situps while watching this fine film and entertaining Lucy as she lolled about on the floor.

“You’ve been training Stripes haven’t you?” said the TV.

I started to laugh. Why yes, yes, I have, how kind of you to notice. I have been training Stripes. If by training Stripes you mean trying to embrace my wicked stretch marks and do something about the dangly skin they occupy. Progress has been slow. I know, I know, it took nine months to stretch the skin it will take at least that long for it to tighten up. But the greater truth? I have never exactly had anything resembling abdominal muscles. I’m not aiming for a six pack. I don’t expect to be able to sit down and not have pudge. I am 36. I have two kids. And I love beer, wine and peanut M&Ms. But it would be nice if my stomach didn’t hang over my jeans while I was standing up. That is a realistic goal, no?

And this friends, is how you polish a turd. Urban Dictionary defines turd polishing as “The act of trying to make something hopelessly weak and unattractive appear strong and appealing. An impossible process that usually results in a larger, uglier turd.”

I beg to differ. I think you can polish a turd.

Exhibit A: The Turd 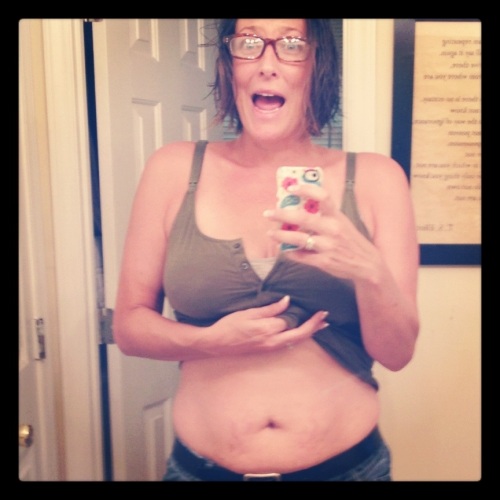 Note the stretch marks, the muffin top and the beloved elastic waist maternity jeans. I know I should retire them. But they are so damn tasty, those jeans. And they love me so. It is my hope that in writing this I will shame myself in to letting them join their friends in the giant box of maternity clothes in my attic.

Exhibit B: The Bright & Shiny Turd

Lucy shall henceforth be named The Turd Polisher. It’s really all about your point of view. As she approaches six month’s old in July I am reminded that I will have ninety days to make good on the old “It took nine months to gain it, it will take nine months to lose it” rule.

I took the first picture yesterday. I was going to write about my progress towards accepting my post-second baby body. Yesterday, in my maternity jeans and feeling hard on myself I didn’t feel like I had made much progress at all.

This morning as I dressed to go for a jog Emily said “You know you could just wear that bra, it is like a running bra, so it is okay to not wear a shirt.” And I looked in the mirror with Lucy on my hip and I thought maybe she was on to something.

I think I am gonna ditch those jeans. And I am getting dangerously close to being the lady at the pool with all the tattoos that pees in the shower and wears a bikini even when she probably shouldn’t. If you can’t tone it, tan it.

12 responses to “Polishing a turd”