An Exercise in Letting Go

I am a creature of habit.  Wake up. Eat.  Do stuff.  Sweat.  Do more stuff.  Eat. Shower.  Do more stuff. Eat.  Repeat.  Last week was tough on me.  There was a lot of Eat and plenty of Do stuff but not enough Sweat.  The plan was to taper my running back in order to feel fresh and strong for Saturday’s 25K.  It didn’t work out exactly as I had planned.

I went to yoga. Twice.  The first time I went I boogied out of there before savasana.  The idea of just chilling, flat on my back for ten minutes was making me crazy.  I had a routine to maintain.  I wasn’t Sweating.  And now I wasn’t evening Doing stuff. I ran a few miles and called that my savasana.  Savasana is your Happy Place, right?  Running is my happy place.

The second time I walked in to class hell-bent on staying.  It is not uncommon to focus on an intention at the beginning of class.  “Stay until the end…. Stay until the end….” I sat, cross-legged and eyes closed, and focused on what was surely the lamest intention for a yoga class ever.  Don’t leave.  Quiet the mind? Forget it.  I just wanted to stay physically present in the room.

We were still in seated meditation when I noticed the clock was missing.  Surely it had been hung up elsewhere in the room.  I’d find it.

Standing.  We were finishing a set of sun salutations and I had managed to inconspicuously look all over the room. There was no clock.

It is hard enough for me to unplug.  My cell phone was on the other side of the room.  And now there was no clock. I had no idea what time it was.  This laid-back yoga class might just have me sweating yet.

We were in triangle pose when I started to freak the fuck out.  How long had we been here?  And I was freezing.  The class before ours had turned the air conditioning on evidently because even our teacher finally remarked on how cold it was in there.  She kicked the thermostat up and we carried on.

Through pigeon and into some seated twists.  We had to be half-way through, right?  An hour class, we’d have balance poses last in all likelihood and that would leave time for ten minutes in savasana.  I was really struggling in this absence of Time. Was it tomorrow?  Had we been here for an entire day?  Was it yesterday?  Oh my god, what in the fuck time is it?  And now I was sweating.  Like, really sweating. I took my jacket off and I could feel warm air all around me and I almost felt feverish.

In the moment that I was convinced I had eaten some kind of LSD with breakfast someone remarked that the air conditioning was definitely off but that it seemed the heat had turned on in its place.   Ahh. I was not alone in this imaginary hot flash.

Up on our feet.  Tree pose.  Dancer’s pose.  Half Moon.  Warrior III. We were almost done. And down on the floor.  Savasana, corpse pose, reflect on your intention for the class.  I made it.

We were seated and smiling.  Namaste.

I waited until our teacher had turned the lights on.  People were talking.  I opened my mouth and without any control of the words spilling out, I spoke. “So, the clock is gone.  That was kind of crazy.  It was like I was eating acid and I was all “Oh man, whoknowswhattimeitis, Ifeelsofree.” and five seconds later I was freaking out because “Holy moly, isittodayortomorroworyesterday!? Add in the whole Iamfreezing, no, waitnowIamsweating factor and wow.  That was some yoga class.”  It is common that following these bouts of verbal vomit there is a strange silence.

My teacher smiled.  “Yeah.  We are going to need a new clock.”

My desperate attempt to take a few days off paid off.  The Merge Records 25K was a smashing success, finished strong, had fun and I am not crippled! Took a short run this morning and I feel super (thanks for asking!) 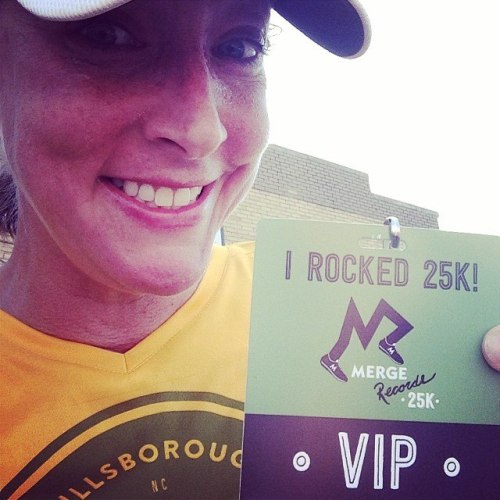