It’s a gamble to take a shower with a toddler in your house.  As desperately as I want to get clean I know that I must also want to Magic Erase crayon from a wall, scoop dog food out of the water bowl, re-roll a roll of toilet paper…. something.

I got out of the shower and I heard her start running.  She was up to something.  “Luuuuucy,” I cried. “What are you doing?”

I did not hear her customary response, “Nothing.” Instead I heard her dive-bomb onto the couch.  “Are you hiding?” No response.

I peeked into the living room to see a pile of blankets on the couch and assumed (correctly) that Lucy was hiding with some kind of contraband.  Whatever it was, she already had it.  I figured I could quickly get dressed while she was hiding.  I threw my clothes on and took a deep breath and prepared to find out what she had been up to during my 87 second long shower.

“Lucy, where are youuuu?” From under the blanket I heard her “Hiding!” only it sounded more garbled than usual.

“Do you have something in your mouth, Lu?” She pulled the blanket down, eyes shining. “What do you have in your mouth, Lu? Spit it out.”  I put my hand in front of her face the way a parent does and steeled myself for halloween candy, a beetle, part of a magazine.

They weren’t bloody.  She wasn’t crying.  And yet still for a brief moment I thought “This kid astounds me.  She has fallen and busted out all of her teeth in the time it took me take a shower and it didn’t even slow her down.”  I am not sure what made me turn back and look into my bedroom.  But there on my dresser was my jewelry box.  It was open and on it was a small blue box.  I started to laugh.  In 87 seconds she had climbed up to open my jewelry box, dig to the back where I hide Emily’s teeth after the Tooth Fairy does her thing, stolen them and shoved them all in her mouth.

With a fistful of spitty teeth I started to laugh.  “Yes.  Rocks.  Do not put rocks in your mouth.”  And I started to count.  I counted the “rocks” and I dug through the couch and carefully ran my hand along my white bedroom carpeting until I had accounted for all of the missing teeth.  Teeth safely returned to their hiding spot I all but forgot she had done this.  (Now that is indicative of how absurd life with an almost three year old truly is, she spit teeth into my hand that she had stolen from jewelry box and I all but forgot it happened hours later.)

Emily got off the bus later that afternoon.  “Look at this, this tooth is loose.”  We had the usual “Let me wiggle it” “No, don’t pull it” “I am not going to pull it, just let me wiggle it” argument.  It wasn’t very loose.  Nevertheless, an hour later she came back downstairs with a fresh gap and a bloody tooth.  “It was a one day process! Loose tooth to missing tooth, Mom! Just one day!”

The world is weird.  That night as I reminded her to put her tooth where the the Tooth Fairy would be sure to find it she smiled at me.  “You’re the Tooth Fairy, too, right?”

“But you’re the Tooth Fairy, right?”

“Do you want your dollar? The Tooth Fairy won’t come if she hears you talking like this.” She smiled and pulled her blankets up to her pierced nine-year-old ears.

In the morning she came down and said “Dad, I got a dollar coin from the Tooth Fairy.” He asked if it was Sacagawea or Susan B.  Without thinking I responded “Susan B, 1979.”

Em just smiled at me and said “Yep. Silver. From the Tooth Fairy.”

There’s something special about Saturdays. This morning I woke and it was raining. Rain meant there would be no Easter Egg hunt downtown. No Easter egg hung meant we had exactly nothing we needed to do today.

Lucy was up around six and snoozing again by quarter after. I laid in bed and listened to the rain and the wind chime. And for Emily. I heard her knocking around upstairs no later than seven. I have never met a kid that take so little pleasure in hanging around in her pajamas. Fully dressed and accessorized she came banging down the stairs with her new bean bag to set up Saturday morning camp. I heard her move the foot stool and kick the tv on.

Into the kitchen she went to get breakfast. I can remember those mornings when I was old enough to make some weird snack for myself. It was exciting to be all alone in the kitchen. Later in the day I pieced together (through careful examination of the countertops) that she’d made cheese quesadillas in the microwave.

We got moving eventually and went out to get Em a new soccer ball. Home by noon. Grilled cheese sandwiches and cat naps all around. Emily left us on the couch in favor of her caterpillar fort eventually.

The grass was mowed. For the first time since we moved in. I haven’t pushed a lawnmower since I left the beach. Four years. You might think only a new homeowner relishes mowing the grass. But that’s not so. There is sweat. And order. And straight lines. And immediate gratification. So many things I find pleasure in.

I thought the day couldn’t get any sweeter. I took a shower. My second of the day, which as a mother of a newborn is cause for celebration.

I thought we would wrap up Saturday much like the week had been. Simple. The kind of Saturday I hope to repeat as often as possible through the years.

When Em ran in the house she stopped at the carpet of the living room. Taking off her shoes she was grinning like a fool. 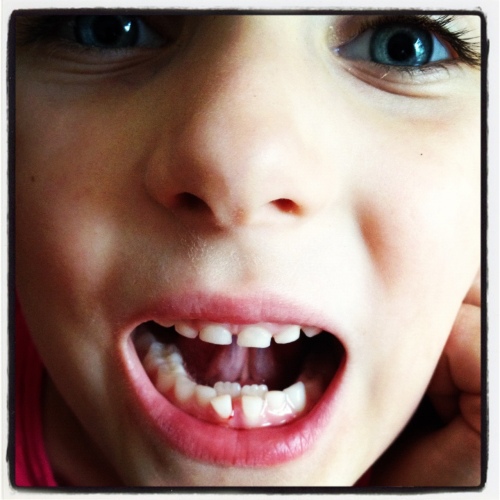 At long last! A loose tooth. This week’s trip to the orthodontist revealed we’d quite likely be making an appointment soon to have her two front teeth on the bottom pulled out. It seemed at least one of them was planning on coming out on its own.

As a little girl I loved a wiggly tooth. I’d flip that tooth with my tongue for days, until it was hanging by a thread. But I guess when you are six years, seven months and two weeks old before you get a loose tooth you can’t wait any longer.

Three hours later Em came running downstairs. The tooth fairy will be at our house tonight. For the very first time.

You can have Santa Claus and the Easter Bunny. I’ll take the tooth fairy. Trading a little bitty baby tooth for a moment of magic. That magic is a silver dollar in our house. She will find it in her tooth pillow and put it somewhere for safe keeping.

Emily has a jewelry box in her room. The kind with a ballerina inside. Tomorrow she will place a silver dollar in her jewelry box. Late tonight I will put a baby tooth in the very back of mine.

Turns out this was no ordinary Saturday.