You can call me Mom, the Yes Man

Sometimes you want to be the parent that says yes.  So this morning when Em said “Can we go to Dunkin Donuts?” I just said “Sure” before I could change my mind.

Thirty minutes later we were eating donuts and hanging out at the swanky truck stop near our house when she said “Do you think I will ever get to play that game?” and pointed to the money robbing machine where you put a dollar in and try to grab a stuffed animal with the crane.  I said yes again.

It was a good morning.  Em was talking us up. Hopped up on donuts and orange juice she was even chattier than normal.

“Why do they make those machines so that you can never win? The man that owns that machine should just do something and get a job to make money instead of taking everyone’s dollars.  Do you think I should pack three or four outfits for while we are gone.  I think four.  Do you know why I always pack an extra outfit?”

“In case you pee your pants?” I said.

And she burst in to tears.

“Why can’t I ever finish what I am saying without getting interrupted?  You guys are constantly acting crazy and saying crazy things and I am just being normal?!!”

And so it has begun.  We are no longer funny.  Poor kid.  It is going to get so much worse before it gets better. 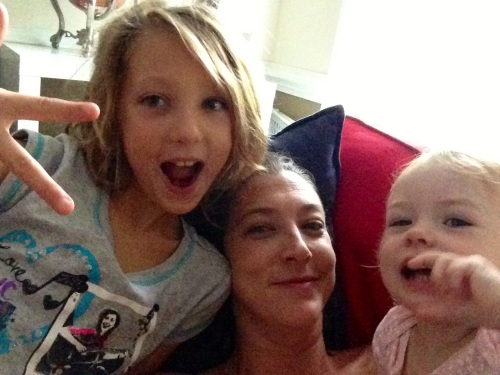 From earlier this morning, when I was still funny.

This entry was posted in Parenting and tagged funny, Humor, Life, motherhood, Parenting. Bookmark the permalink.

12 responses to “You can call me Mom, the Yes Man”