I can hardly speak… 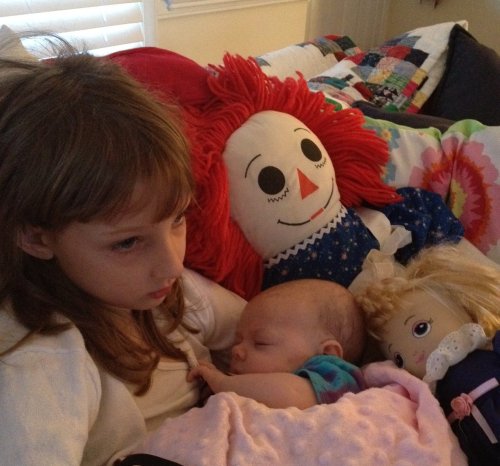 “Heaven, I’m in heaven...”  Frank Sinatra, Louis Armstrong, Ella Fitzgerald, Bing Crosby, hell even Mel Torme… I’m not picky.  One of the most beautiful songs ever recorded is Irving Berlin’s “Cheek to Cheek.”

And every night I think I might crack, I might not make it.  Swaying back and forth in the darkness of our bedroom there is a moment when I can hear Lucy exhale and her head falls against my shoulder.  I sway, I bounce a few extra moments to make sure it is really gonna stick and I lower my head,  my cheek rests against hers… and every night, I am in heaven once again.  As we dance, slowly, back and forth cheek to cheek.

Motherhood doesn’t turn  you in to a saint.  You still have the moments that you think what the shit was I thinking, this is a thankless job.  I have that moment nightly when I think how long will this last?  The screaming every night… and then my cheek rests against hers and I know we will make it through at least one more day.

As I paced with Lucy the other night, my eye on the clock because she has just about exactly an hour in her, I started to giggle.  I came out of the bedroom to tell MQD that as long as this hour may seem now, the two, maybe three hours we will spend saying “Get back in your bed, Lucy” when she is four years old, they will seem exponentially longer.

You never realize how few lullabies you really know until you have a baby.  I had  also never given any thought to how incredibly sad the lullabies I did know are.  (Please don’t take my sunshine away, are you fucking kidding me?) When Emily was a baby we rocked and I sang.  That poor kid might have thought her name was Tennessee Jed.  Eventually I looked up lyrics to some lullabies, tried them out, but none of them resonated with me.

Eventually I settled on one song, a long one with lots of rambly lyrics, R.E.M.’s “You are the Everything.” I could get at least to the second verse before I got weepy, no small feat for the new mother.  And now I find myself settling on this song yet again.

“She is so young and old, I look at her and I see the beauty of the light of music…”

As I swayed and I sang I remembered when I first heard that song.  It was on the Green album, 1988.  I had it on tape.  It was the summer I discovered the bikini and “laying out” and walkmans and baby oil.  I thought I was so old.  That song used to smell like fresh cut grass and lemonade and composition books  (because even at 12 I had developed that teenage affectation for carrying around a notebook to record my most scintillating thoughts) and hardback copies of Stephen King’s books swiped from my parent’s bookcases.

Now that song still smells like babies.  “You are here with me, You have been here and you are everything…” I know both of my girls were with me then, too, in my back yard, trying to look casual as I watched the side of our fence, hoping that someone might walk by.   I hadn’t met them.  In truth, I had not even really begun to imagine them.   But they were there.  They have always been there.  They have always been everything to me.

And now they are here.  My girls.  I waited a long time for this.  And even the screaming, the late night crying, I won’t wish it away.  Close my eyes, sing 25 year old  R.E.M. tunes and try and smell the cut grass?  Sure.

But I am soaking it up.  Like the sunshine in my back yard.

I threw my phone on the bed the other night in the middle of Lucy's scream session. I must have pressed a button. According to Siri - this is what she was saying. She is "on and on" that much is right.

12 responses to “I can hardly speak…”