They say (and in this instance the “they” I speak of is actually my mother) that no two kids have the same parent. I was thinking about just how true that statement is yesterday afternoon while I was in the shower.

Lucy was on the floor, right outside the shower. The sound of the shower generally has the same calming effect as the vacuum (and that kid loves a Dyson almost as much as her mama.) I had just put conditioner in my hair when her wiggly sounds went from cheery to filled with rage. Emily’s mother would have leapt from the shower, conditioner still in her hair, soap in her eyes, one armpit shaved and tears in her own eyes to determine what was ailing her sweet baby.

Lucy’s mother poked her head out the curtain and started down the path of insane nonsense singing “Luuucccyyyyy….. Can you not see I am in the shower???!!! I realiiiize this statement has no poooowerrrrr….. you seem not to give a shit, if i have shaved but one armpit!” and so on. I’ll spare you. She is only a fan of my songs about half the time, there is no reason I should subject anyone but family to these tunes. (Now would be a good time to mention that I actually had a Voice teacher in college fire me. Suggest that perhaps my singing training would be over that semester, I had come to the end of the line.  I was hopeless.)

All my songs bring to the table is my witty and charming lyrics. This I come by genetically. My own mother’s top hits I can still recall. A song penned to horrify my brother “Brassierre!!! Let me whisper in your ear, about my favorite brassiere….”

Not all songs were intended to embarrass us. Occasionally they were delightful, as close as we got to positively sinful. A song popular around Thanksgiving, to be sung at full voice to the dogs. A song perhaps my mother regretted the moment it came from her mouth as it was quickly adopted as an all time favorite. I share with you now, my mother’s greatest hit “Poultry.”

“Poultry gives you gaaaas! You blow it out your…” We rarely even got to the “ass” part as the giggles were convulsive by then.

I digress. Kids. They all have different parents, even in the same family. I was more fearful with Em in the beginning. More doting. Lucy gets a better mother, in some respects. I know what I am doing. But does she get the shaft because I don’t leap to her aid in a nanoseccond? I don’t think so.

It was the first time that we were all home alone without Dad. Just me and Em and Lucy Goose. I was making Em a sandwich. I had put Lucy down for the first time all day. And she started to cry. “Hang tight, little mama, your sister needs to eat, too.” In a family of more than one child sometimes we have to wait out turn. Emily was important, too. 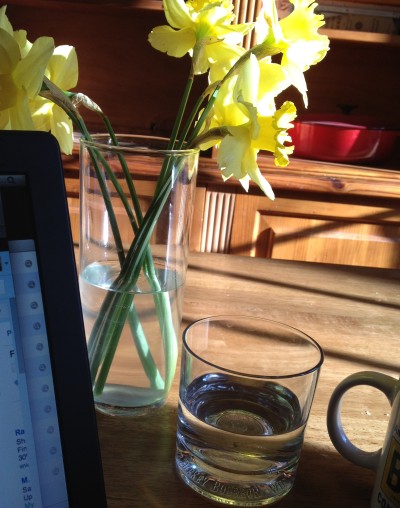 It took less than sixty seconds to get a cup of coffee and a glass of water.

As a mother it is unspeakably painful for me to hear my children crying. 60 seconds. I can take it that long and then I crumble and run for them, arms open. But did you know you can eat a hardboiled egg, finish a shower, get fully dressed and brush your hair, make your bed, pee, run a pile of crap up the stairs and put it in the room where it belongs if not actually put it away… you can do any one of those things in only 60 seconds. And when you return, arms wide open, you are forgiven immediately. For taking 60 seconds.

Maybe she forgives me only because the singing stops when I return. You think the one about shaving my armpits is awful, you should hear the one about peeing all alone. Suffice it to say Eponine’s “On my own” from Les Mis was my inspiration. 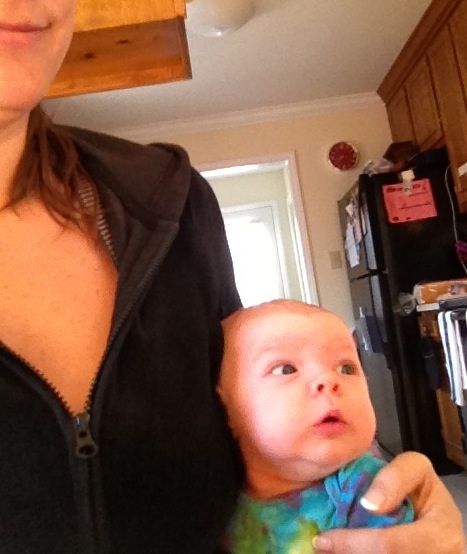 For the record this message was reviewed and approved by Thing 2. I realize she looks like she is watching a horror show but that is a face of approval.