And Then We Were Four: Part Four

It was decided that I would stop trying to push through the last centimeter of my dilating, that I would  stop and take a break, let my body finish doing the work.  Then it was determined I should change position.  In spite of the enema I had managed to give myself during early labor the shred of privacy I had been maintaining was holding on to the fear that it felt like I had to go to the bathroom.  When Sarah suggested I go sit in the bathroom for a while it sounded like as good a plan as any.  Pillows were placed on the back of the toilet and I sat backwards with my face against the cool, soft pillows.  In the dark it was easier to let my mind go.

Earlier, I had gotten very sick.  Throwing up like a freshman at a fraternity party, I couldn’t even open my eyes lest I see the bucket and get sick all over again.  (Hello, chinese food, I had to have!!) I took a new bucket with me to the bathroom just in case.  There, in the clean white bucket from the birthing center was a single dog hair.  Even amidst the mania I felt… I smiled, Fisher… his damn hair gets everywhere.

Changing positions brought no physical relief.  If anything it required the body to  acclimate to new pressure points, new pain.  At this point each contraction seemed to radiate down in to my legs.  Later I would have IV fluids to hydrate me and the pain in my legs would  almost immediately subside.

Physical relief did not come while I was in the bathroom, but it did give me a moment to regroup emotionally.  I’d had my eyes closed much of the previous hour and now in the darkness I could  feel only hands rubbing my back.  Not knowing if it was MQD or Erin  – it almost didn’t matter.  I cried out as my contractions peaked.  Spoke quietly to myself and to the baby in the interim.  I don’t know how long I was in there.  But when I came out, I knew it was time.  I said more than once that I felt like I had been asleep.  And like I had just woken up.  I asked several times for Erin to tell me again what was happening.

For a time I felt like I was trapped between the bathroom and bed. My body had returned to the bed, my mind had stayed in the bathroom.  Eventually we all reunited and a feeling of calm alertness washed over me.  MQD smiled at me and I could see in his eyes the relief I was experiencing.  Never once did he look frightened, but he looked so happy to have me back that I know it must have been quite a scene there for a bit.

As with so many things in our lives the clearest pictures are those that we can see only after the fact. From this side of things I know that it was the final stages of transition in the bathroom.

As much as it was almost unnecessary to check, I needed to hear it. When Sarah said “You’re ten centimeters, we can have this baby any time you’re ready,” tears began to flow down my face.

I had watched a lot of birth videos.  I had seen images of these smiling women as they pushed their babies out in to the world.  But I had imagined I would be more of the Linda Blair/Exorcist labor and delivery type  than the Blissed-out Commune Mama type.  This picture does not tell the whole story, certainly.  But it captures the joy, the lack of a sense of fear and urgency, the calm that was in the room before Lucy made her debut. 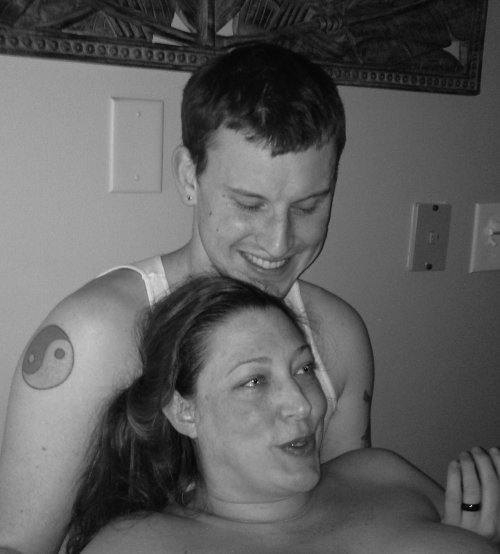 Our doula, Erin, pulled triple duty as she held the mirror, the flash light and my iPhone throughout the home stretch.  Sarah suggested I reach down and touch the babies head and I asked her to guide myhand.  In keeping with the sense of levity throughout my labor Erin said “I don’t know how big your vagina is exactly, but you’ll find it.”

As soon as I felt her the waterworks began again and I wondered how I would  ever continue to push slowly, not risk tearing.  At one point (after I had the moment of clarity wherein I asked for my glasses and could  actually see in the mirror!) I saw her head begin to emerge and then as I tried  and relaxed between pushing I saw it retreat.  “No, no, no, baby, come back….” and I wept.

I told Sarah and Missy and Erin the story of my dream, how Baby D came and knocked on the door and I didn’t pick him/her up.  How I was so terribly afraid that I didn’t do the right thing.  Sarah reassured me that the baby would descend at least as far as they had previously with each push.  So, I relaxed.  And spoke.  “Come on baby, I promise I will pick you up, and I will never let you go, just come out… Come on… I am right here.”

And slowly, I saw this tiny flash of baby hair become a baby.  I was waiting for the ring of fire, and as I saw the head emerge I can recall thinking this must be it… and then the head would grow bigger.  Later they would  tell me Lucy was born with her hand against her face contributing  to her already giant sized baby head.

I felt it, finally. The mystical ring of fire, the moment that your body is open, allowing passage of your child in to the world and then I saw her face.  Red and smushy, bloody and quiet.  With little effort  her shoulders appeared and I had my hands hooked beneath her armpits and I was pulling her on to my chest.  Our baby. She was here.

I cried out for Emily. I had been adamant that no one tell me if we’d had a boy or a girl and we realized as Emily entered the room that from my vantage point I really couldn’t tell.  And no one else had gotten a decent look. So, it was Emily that told me.  My sweetest girl, my Emily June, it was she that said “It’s a sister.”

“You got your sister, baby girl…” I said,my eyes flooding with the realization that my baby girl, was no longer my baby girl.

We stayed at the birth center only a few hours before we headed home.  Our family of four.  Mom and Dad in the front seat.  Our girls sleeping quietly in the darkness of the early morning.  I carried Lucy Quinn in to the house.  A teeny tiny girl in her car seat.  MQD carried Emily June up to her bed, her long legs looking even longer as he carried her past me up to her room.

It was just after six in the morning.  A new day.  We were home.  And then we were four.

26 responses to “And Then We Were Four: Part Four”