They say it takes a village.  I think it takes only slightly less than a village.  Which is fortunate, since I am not sure where exactly I’d go to find a proper village.

I think raising a kid takes more of a compound.  And several cases of wine.  We went over to the new house again this weekend to take some measurements.  Through the empty house I could hear Em and her long time pal, Kellan,  raising hell.  Eventually we threw them outside.  I could still hear them, chasing each other across the yard.  I stopped and looked out the window and there was my daughter.  Stick raised like a spear in hot pursuit of a boy she has known since she was three months old. 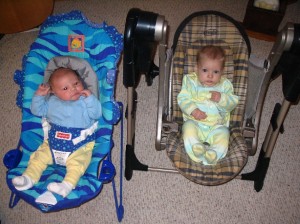 When they were small we lived within walking distance of one another. .9 miles if we walked Bay Drive.

Amy recalls the weeks before Kellan was born, we’d walk.  The dogs on the leashes,  Emily crying in her stroller. Me, crying and mumbling about how I didn’t know  what to do!  Eventually Em stopped shrieking all the time.  And Kellan was a calm sort of fellow.  And we took them for strolls around the neighborhood and we stared at them.  Because that’s what you do.

And then before we knew it they were big enough to haul around behind the bikes.  And we could stop staring at them for a few minutes at a time.  And they’d entertain each other.  They were moderately mobile.  Those were peaceful months. 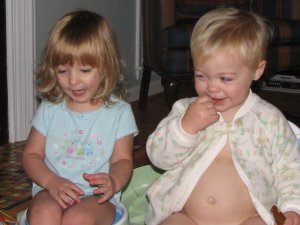 The following year went by fast.  My “village” moved to Chapel Hill.  I took walks by myself.  I trained for the OBX half marathon and Em and I listened to music as we ran up and down Bay Drive.  Solo.  I’d talk to her when we’d pass Dock Street, the cut-through to Kellan’s house.  “Do you remember where your buddy lived?”

We visited.  We got the requisite “Look at you two on your potty seats” picture and in retrospect it seems we didn’t miss much.  The story told by the pictures hardly registers a lapse. 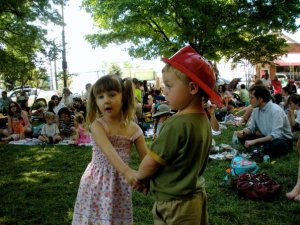 The Fall of 2009 I moved closer to my village.  I had to go somewhere and Chapel Hill felt like home.  There were trees and Targets and a DSW  (a welcome combination after eight years on the beach with a K-Mart and a hundred Wings beach stores.)  When you are picking up your life and starting over you need something that is familiar.  I needed trees.  And Amy. Chapel Hill gave me both of those and more.  The kids were still too little to register that they had ever been apart.  Em delighted in telling people that she knew Kellan “before he was born.”  And I had a standing invite to dinner.

We kept waiting to see when the evidence of their being opposite genders would appear.  Slowly it reared its head.  Em wanted to play house and “family.”  Kellan wanted to dig in the yard.  He informed me on a few occasions that his “buddies at school” they played games Emily did “not even understand.”  When Kellan told Em he had planned to marry another little girl in his pre-school she told me it was okay.  She’d just be Kellan’s friend for now.  And marry him later “when he was done being married to that other girl.” She is wise beyond her years, that girl.

Em went in to her deeply pink and purple girly phase.  Kellan embraced the dirt, his trucks, and all things LOUD.  But they still entertained each other.  And we got an evening, an afternoon here and there to feel like grown ups.

I tried not to tell Emily that we might be moving in across the street from Kellan.  But she is whip smart.  And I was too excited.  She was over the moon.  Kellan is thrilled to have a sidekick that is available to play at 8 am.  And Amy & I are becoming those parents that talk about the “damn teenagers speeding through the neighborhood” and getting a “Slow: Kids at Play”

I looked out the window and I couldn’t help but imagine the changes we will see in them both.  Kellan is a Big Brother now.  That rough and tumble boy kissed my stomach this weekend and said “Hello, baby!”  Em has grown out of the 24 hour a day princess phase and seems to be wielding a spear-shaped stick with skill.   Next week they will add neighbors and school friends to the list that describes their relationship.  It should be entertaining to watch it pan out.  We are both prepared for the day they announce that they “hate” one another.  It’s inevitable.

In the meantime they got busted kissing and playing wedding behind the side of the house on Saturday.  And we haven’t even moved in yet.

She claims she was telling him a secret. Perhaps the first of many these two will share.

This entry was posted in Family, Parenting and tagged Emily, Friendship, Moving, Parenting. Bookmark the permalink.

3 responses to “The Village”