The snow has melted.  Less than 24 hours later and there is almost no evidence of what may prove to be the only snow fall we see this winter.  But my refrigerator and my stomach still tell the tale.

Em had the day off school yesterday and we had big plans.  We were going to eat.  And stay in our pajamas.  (And watch Judy Moody’s Not Bummer Summer, but I was slightly less excited about that than she was. ) I checked in with MQD mid-morning to see what he’d like for dinner and he responded immediately “Shepherd’s Pie.”  I’ve never made Shepherd’s Pie but as far as I know, there is no way to ruin meat, gravy and mashed potatoes in a casserole dish. 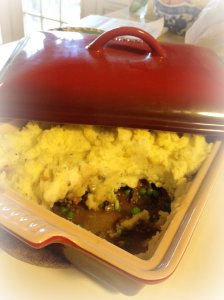 Early yesterday afternoon it seemed like my dreams might not be realized.  By lunchtime I was out of my pajamas and running to the store for a five pound bag of potatoes.  An hour later I was peeling that bag of potatoes while Lucy slept in her car seat.

While the potatoes boiled Em and I watched some of her movie and I fed the little lady.  I erroneously thought she might get back to sleep.  In case you are wondering, if you are ever preparing to enter a contest that includes the Triple Dog Dare Challenge  “Mash five pounds of potatoes with your right hand while you jiggle an eleven pound baby with your left hand” I’m your girl.

Later that evening MQD says “Dinner looks good, baby” and I suppose I could have been more humble.  “It damn well better, the potatoes alone took me two hours.”

I promise it is not my lack of employment that is making me all cook-y.  It’s the cold weather.  Two winters ago was the Winter of Italian Wedding Soup.  This month marks the start of the Winter of Shepherd’s Pie.  I cheated a bit and used McCormick’s Brown Gravy mix because I forgot to grab Worcestershire at the store.  But it was a smashing success.  I will be eating and then repeating this meal.

Em was Clean Plate Club all the way.

Lest you think I am gonna get all whole foods, hippie dippy on you…. fear not.  We had dessert, too.  A certain little lady turned one month old yesterday.  So a cake was in order.  I’ve seen this recipe before but decided to give it a go.  The Two Ingredient Cake. Pick your poison – One can of soda, one box of cake mix. Mix.  Cook and enjoy.  We opted for Sprite and Strawberry cake.  Cream cheese frosting, of course.

It has that Pop Rocks  “Holy shit what I am eating is totally artificial” flavor and it makes my teeth feel like they are wearing a sweater but damn… it is tasty.

I cooked this entire dinner with a wide awake one month old Lucy bouncing on my shoulder.  Evidently it wore her out.  Because she fell asleep in the middle of her party.

The Pre-Party can sneak up on you, little lady.  Take it from your mother.  She has slept through a few parties in her day. 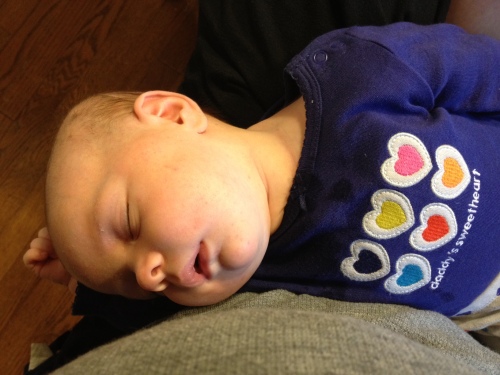