The American Dream means something different to everyone, I suppose.  The Happiness I pursue looks different through my eyes than it might through yours.  You might not even see the Happiness I so fervently strive for as worthwhile.  But there is one thing on which we can all likely agree.

I daresay there are very few Americans that will not thank a veteran or an active duty military person today.  No matter how close or how far you may be from achieving your Happiness we all have our country’s service men and women to thank for the opportunity to dream Big.

And this is when I started to cry…. I was planning on writing about how this is the first Veteran’s Day since my grandfather has passed away.  And the first Veteran’s Day that my brother has been out on a submarine, leaving his pregnant wife behind. And how my Happiness seems so attainable recently and how grateful I am for the Life & Liberty portions as well.   But I can’t make any sense at all now… because he called!!!  (My little brother, not my grandfather.  I am pregnant and emotional but I’ve not lost my mind. )

I am, without contest, the sappiest person in the family.  And a phone call from my little brother is the best way I can think of to celebrate Veteran’s Day.  I could be no more proud of him.  His boat departed in May, shortly after finding out he and his wife are expecting their first baby just after Christmas.  I thought that the day he was married I’d stop thinking of him as my “little brother.”  And surely the day he called to say that he and Lauren were pregnant I’d accept that he was growing up.

But it wasn’t until I got his call this morning.  On an international number.  From his desk.  On a submarine with the United States Navy.  He said that the beers were cheaper in port than a glass of water.  But he was most grateful for a few good night’s of sleep.  We talked a little about my pregnancy.  And a little about Lauren’s.  And we laughed as I pointed out that the four or five hours of sleep he gets now on the boat every 18 hours is more sleep than he’ll get when his daughter is born in the week following his homecoming.

He sounded like  a man.  That little brother of mine.  He sounded different.  Not older or wiser, just different.  He has been my brother for 31 years.  He has been in the Navy for over a decade.  And married for more than six years.  In about eight weeks he will be a dad.  He didn’t sound different to me until today.  I’m thinking it is the impending dad-ness.

Happy Veteran’s Day, Scott.  Come home soon.  There are two ladies in Hawaii that can’t wait to see you.  One of them will do everything she can to keep the other one snug as a bug and unborn until you get home.  But don’t push your luck. 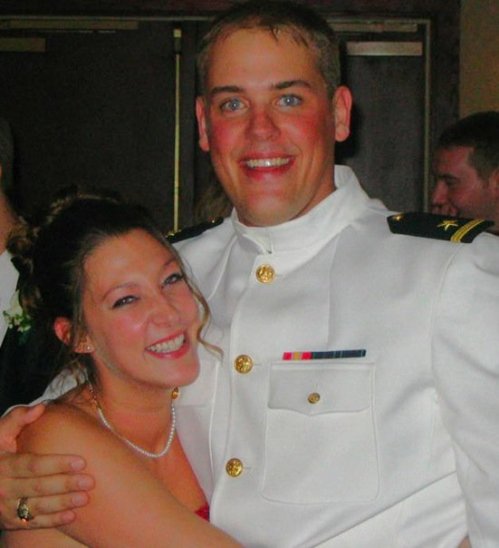 Scott, on his wedding day. I was pregnant with Emily. It was a lifetime ago. But I will never forget his smile that day. I've never seen him so happy before or since.

18 responses to “The American Dream”